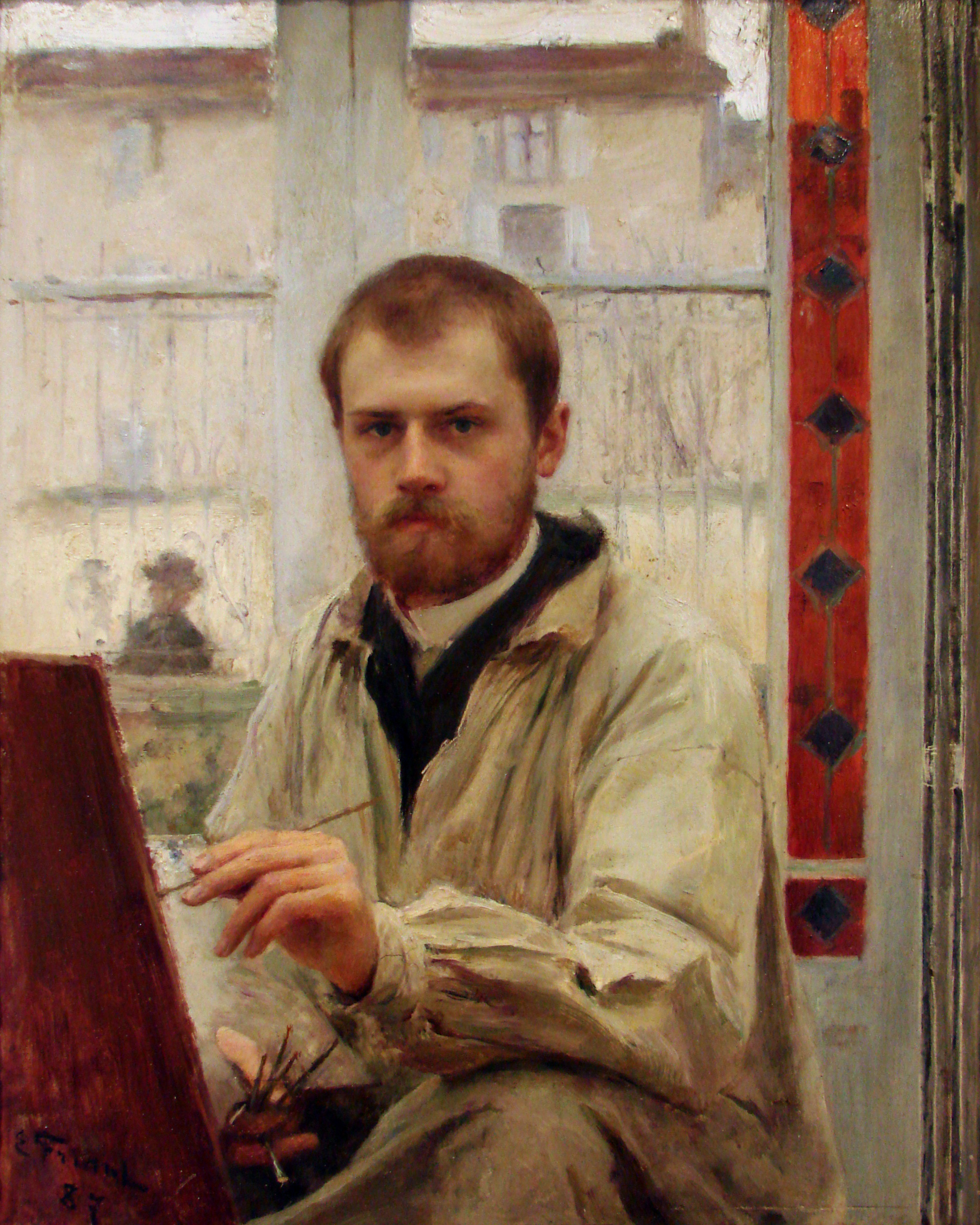 The painting is modest in size but the modernity of the touch and the staring eye make us forget about the “small format.”

Emile Friant depicted himself in the foreground with strength and intimacy, two qualities that would later make him famous. He was 24, and we are in 1887. The scene is set in Nancy, may be on the 26 rue Jeanne d’Arc, where his father had moved after fleeing the little town of Dieuze which had been annexed by Prussia in 1870 as a part of Moselle and Alsace.

In this portrait, the artist seems to remember a maxim from Théodore Devilly – his master at the drawing school – saying: “ Look around you, observe simply and translate earnestly.” Here, Friant is looking around, observing and translating his feelings into the wood panel in front of him. This deeply accurate observation of reality would eventually become the trademark of the master from Lorraine.

At first, one might think that the painter is staring at us when in fact, he is looking at a mirror. Although Friant was right-handed, through the looking-glass, he becomes left-handed. He is depicted alone in what seems to be his atelier. It looks peaceful, one doesn’t hear much, expect maybe the sound of the sleeves of his coarse chalk-white overall moving at every brush stroke and of passers-by in the background.

The background was executed quite rapidly, the shapes are dimmed and the outlines blurry. The black-hat man, spying on the artist at work is also swiftly painted. The presence of this roughly painted man in the background contrasts with Friant’s own sharp representation in the foreground, allowing depth to his composition. Even though the theme of self-portraiture in the artist’s studio is considered academic, the outcome here is quite different. The striking contrasts in the composition enhance the artist’s strong presence, as if imagined through the lens of a camera focusing on the main character’s face.

This detailed composition is certainly the result of a trip to Antwerp Friant did the year before (1886). The large window that is almost filling the whole background and flooding the scene with light, is in fact reminiscent of Flemish art. The wintery atmosphere is conveyed through a breath-taking palette of whites. There is indeed a frosty feeling about the buildings’ facades and the fence freshly covered with snow, but also about the bright walls of the atelier and the blouse. White was one of Friant’s favourite colours; sometimes the white of happiness one can find on La Barque, sometimes a melancholic white like the one surrounding La jeune Nancéienne.

The black jacket underneath Friant’s blouse adds depth to the composition. While the low temperatures may have forced the artist to wear a suit under his overall, the black collar is beautifully highlighting his face. The treatment of the window frame with its thin edge made of translucid coloured glass, shows the artist’s mastery of pigments. Contrasting with the light stained-glass while also creating a sense of depth, the back of the wood panel Friant is painting is eye-catching for its rich nuances of red.

Painted on wood, this Self-portrait is a dashing mise en abyme: one is looking at the panel that Friant is painting in his atelier. The artist wants to face the viewer and show himself as he truly is, away from academic conventions. The strong and profound gaze, the blurred background enhancing the subject, as well as the reflective and vibrant light make this painting a masterpiece by Friant. We are silently observing him.

Translated from French to English by Ludovic Diaz and Agnès Penot